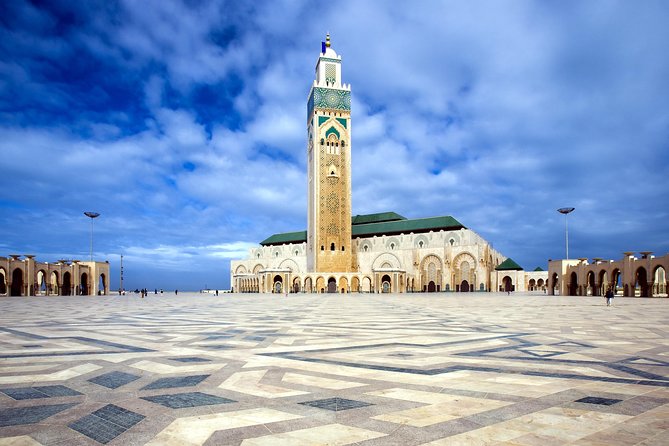 The Casablanca City Tour developed from a small fishing port at the beginning of the 20th century to become the commercial and economical center of the whole country. This is in addition to the large number of travelers who tour Morocco and visit Casa every year.

Casablanca is the third largest city in Africa after Cairo and Lagos in terms of the number of population. The city is famous for its marvelous blend of ancient sites and modern establishments. The city of Casablanca is included almost in all travel packages to Morocco.

Today, we would be highlighting some of the most major and remarkable historical sites of Casablanca

The Mosque of Hassan II

Among the most impressive elements of the Mosque of Hassan II is its tall minaret featured with its Andalusian style and its height being 210 meters. The mosque can take up to more than 100,000 worshipers as it was constructed over a surface area of more than 9 hectares.

Located near the Royal Palace of Morocco, the Habous Quarter is one of the oldest sections of Casablanca. This is in fact the old quarter of Casablanca that was established in 1917 by French architects and it took them more than 10 years to finish its construction. Today, the Habous Quarter is one of the most popular touristic sites in Casablanca included in many tour packages to Morocco.

Characterized by its distinctive architecture and outlines, the design of the district followed the lines of the ancient quarters like these in Fes and Marrakesh. Habous Quarter is also famous for selling all the wonderful traditional Moroccan goods including robes, silver, leather, wood products, copper pieces, and handmade carpets. This is in addition to some food products like olives, olives’ oil, and meat. A visit to the Habous Quarter is vital for any traveler spending his vacation in Morocco.

The Museum of Abdel Rahman El Sellawy is one of the best places where travelers whotour Morocco may view the history of the country. The mosque was named after the famous Moroccan traveler who was born in 1919. The museum displays a large number of exhibits including portraits, antiques, and much more. Any history fan that is spending his vacation in Morocco would surely enjoy his visit to the Museum of Abdel Rahman El Sellawy.

The Jewish Museum of Casablanca is the largest in the Arab World. It illustrates the life of the Jews in Northern Africa. Occupying a surface area of more than 700 square meters, the museum displays many sculptures, portraits, and photographs. This is in addition to three rooms that are specified to illustrate the religious and family life of Jews in various periods of history. Established in 1997, the museum today is one of the most interesting places to visit during a holiday in Morocco that includes a visit to Casablanca.